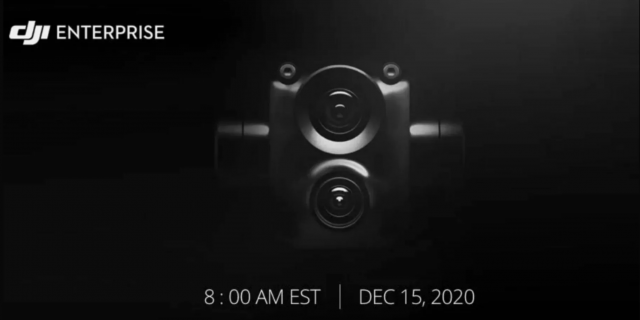 On December 11, 2020, DJI tweeted out a single image that rocked the drone world. While many are speculating that DJI will finally unveil their leaked FPV drone, we don’t think that will be the case. In fact, we have some alternative guesses thanks to a few key clues in the tweet.

First and foremost, this is coming from DJI’s “Enterprise” division. This is the side of DJI that deals less with drones making fun marketing videos and more with the high-tech drones that make infrastructure inspection and firefighting easier and safer. You can see DJI Enterprise dealers leveraging these abilities across a wide range of industries, from pipeline inspection to police applications, but the point is that the FPV drone isn’t part of the Enterprise division.

As you can see from the leaked image, DJI’s FPV (or, “First Person View”) drone package comes with goggles, a video game-like controller, and a small yet robust drone built for racing. There is admittedly a large demand for consumer drone racing leagues and recreational uses, but this is simply outside of the more commercial and industrial aspects found in DJI’s Enterprise division.

So, if the FPV is out, what could be announced?

With DJI’s Phantom lineup phasing out, it’s unlikely that DJI will be introducing a Phantom 5 anytime soon. Next to cross off the list is another Matrice drone, since the brand new Matrice 300 RTK was just announced a few months ago.

The Inspire line could use an upgrade, but it’s mostly forgotten outside of the film industry.

That leaves the most likely contender to be a full unveiling of the Mavic 3 Pro. The rumor that the Mavic 3 Pro will come with LiDAR capabilities is bolstered by DJI’s tweet, which shows two unique lenses on the same drone.

This also tracts with DJI’s Enterprise branding, as the Mavic line is used in commercial-scale surveying and data processing, but without a LiDAR camera the accuracy and ability of the Mavic line has been left a little behind.

All of that being said, this could be the launch of an entirely new DJI lineup that we haven’t seen before. Regardless of possibility, we’re excited to see what new tech will be revealed to the market in less than a week’s time.

Check back on Wednesday to see our breakdown of the announcement!